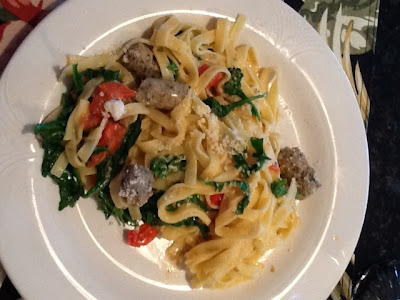 Updated from July 2013 and in time for summer meals

Our kids are home this summer and already complaining that they are bored.  Hubby and I are working everyday, with a bit of travel thrown in there as well and then find our selves coming home and trying to find something for dinner.  Well after a few days of that and coming home to a  marathon of “Say yes to the dress” on in the family room we said – find something better to do.

Our daughter loved to cook last year, I suggested she find something to make for dinner. “Let us know what you need from the grocery store and we can make it happen”.  So, low and behold our little chef is back in the kitchen whipping up a Cooking Light dinner for the four of us.

Cook pasta according to package directions, omitting salt and fat. Drain in a colander over a bowl, reserving 2/3 cup cooking liquid.

So yesterday morning I walked out to the garden to gather the mixin’s for some fresh, home made salsa.  It is very simple to make and mixes up real quick.  I picked 3 tomatoes, 1 bell pepper, a couple of jalepeno peppers and some fresh parsley.  I went back to the kitchen and a grabbed my Better Homes and Garden cookbook.  Opened to the last page of the section titled sauces and relishes and began the preparation.  Fifteen minutes later I have a bowl of salsa chilling in the refrigerator for later.

Our afternoon was going to be spent watching our son play in the first round of his basketball tournament.  I was hoping for a win so that we would have been done about 3:30, we could head home for a little wine on the patio and then a great steak dinner.  Well, it did not turn out that way. They lost their first game and were set to play again at 5:30.  It was a double elimination tournament and there was a delay.  Game started after 6 p.m. and when they finished, with a win (back on Sunday) it was after 7:15.
We headed home for the evening and while our son went off to play with the kids in the back yard, we settled in for a cup of coffee before heading up to the neighbors fire pit.  Next thing we know our foodie friends pop in, with a bottle of wine and his home made salsa!
So this morning we out the two to the test!  My salsa is on the right. 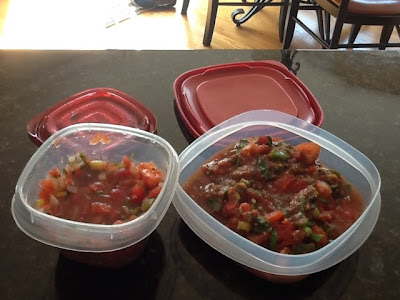 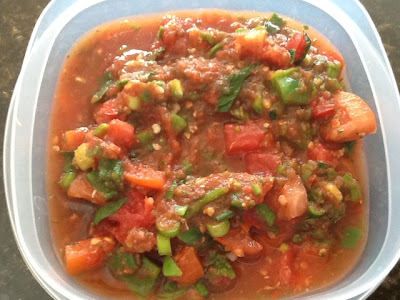